​Donald J. Trump for President, Inc. hosted 'Team Trump Online! Triggered' featuring Donald Trump Jr. and singer-songwriter and conservative political activist Ted Nugent.
The panel discussed the bold action President Trump has taken to facilitate greater opportunities for America's outdoorsman and how critical hunting is to the conservation of U.S. lands and waters. They described the disappointing ways Democrats are using coronavirus to infringe upon individual liberties by banning boating and fishing in Democrat-led states like Michigan. Additionally, the panel highlighted the challenges that come with being a conservative in show business. 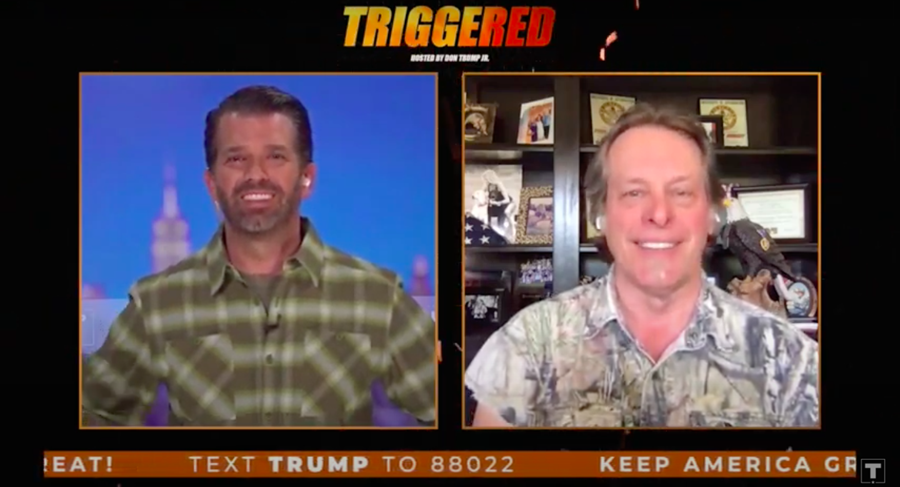 ​CLICK HERE TO WATCH
“From day one, President Trump has valued our fundamental, Constitutional liberties and has been a staunch defender of Second Amendment rights for all Americans,” said Donald Trump Jr. “Joe Biden and the radical Left are working around the clock to completely undermine our freedoms and take away our guns, while President Trump is keeping his promise to open up public land and protect the right to bear arms for America's sportsmen.”

"Growing up, I learned the value of hard work, hunting, and rugged individualism," said Ted Nugent, singer-songwriter and conservative political activist. "Unfortunately, the traditional values and hunting lifestyle I acquired as a kid are under attack in today's culture war. It is crucial that outdoorsmen across the country stand up for their beliefs and vote for President Trump so that our hunting rights will continue to be protected."