This memorandum lays out two important sets of facts as we head toward the home stretch of the 2020 campaign for president. First, there is clear and irrefutable evidence that Joe Biden’s candidacy has a decided lack of enthusiastic support as compared to President Trump. Second, the public polling on which the media relies is based on cheaper, inferior methods and should rightly be viewed as flawed and non-predictive.
I. The Enthusiasm Gap is Real and Wide
Just more than four months out from Election Day, a clear trend has emerged: while President Donald J. Trump enjoys historic support among Republicans, Democrat voters continue to offer unenthusiastic reactions to their presumed nominee, Joe Biden.
President Trump has attracted record-breaking support in 2020’s primary election voting when compared to recent incumbent Presidents of either party seeking re-election.  President Trump has received more votes than former President Barack Obama in 23 of the 27 states which have held primaries in both 2020 and 2012 (the year Obama ran for re-election).  In many cases, President Trump received two- or three-times Obama’s totals.  President Trump has also received more votes than President George W. Bush when he was seeking re-election in 2004.
President Trump has historic support within his own party. He has already won over two million more votes than his total in the 2016 primaries, setting a record for most votes ever cast for an incumbent President. He has set dozens of records for votes cast for incumbent presidents in their respective state party primaries and has won over 94% of all votes cast in the Republican primary.
By contrast, former Vice President Joe Biden and his campaign have yet to inspire or coalesce their own base. It is important to remember that Bernie Sanders became the last Biden challenger to exit the race on April 8. During these nearly three months since Biden has been considered his party’s presumed nominee, 18 states and the District of Columbia have held primary elections. The results are not encouraging for him.
In primary after primary, an alarming number of Democrat voters have cast votes for someone other than their own party’s presumed nominee. These voters are speaking clearly and yet the media has not heard them.
To begin, let’s review Biden’s vote share in primaries occurring after Senator Bernie Sanders dropped out of the race:​

Despite being unopposed by any active candidates, Biden earned barely half of the vote in some contests.  In his very best primary, he received less than five of every six Democrat votes.  Most of his efforts fell somewhere in between.  Notably, one of the two primaries held this very week was almost as bad for Biden as his first one as the presumed nominee two-and-a-half months ago.  This is not good news for him.  And, of course, these figures represent only those Democrats who bothered to vote at all with Biden on the ballot.
Clearly, Democrats have not rallied around their flawed candidate, who was thrust upon them as a bit of a surprise in the state primaries occurring immediately following the South Carolina contest.  More than two months later, Biden can accurately be described as being in worse shape within his own party than he was at this time in April. After more than eleven weeks as the presumed nominee, Biden is still struggling to unify Democrats behind his candidacy.
For additional historical perspective, consider that in 2016, Hillary Clinton received 55% of the total votes cast in the Democrat primary. Today, Joe Biden has earned less than 50%. The real conclusion to be drawn is that, despite having no opponent actively campaigning for over two months, the former Vice President faces vibrant disunity within his own party.
Joe Biden’s limited support in his own party’s primary does not stop there. The lack of enthusiasm does not portend well for the November turnout needed to defeat an incumbent President with an enthusiastic base.
In the recent Fox News polls of Florida, Georgia, North Carolina, and Texas, the President holds enthusiasm advantages that range between 19% and 33% in his favor.
In the recent New York Times/Siena College polls of Arizona, Florida, Michigan, North Carolina, Pennsylvania, and Wisconsin, the enthusiasm gap widens.  In those states, the President’s enthusiasm advantages range from 32% to 46% -- meaning that in these states, far more voters say they are voting for President Trump because of President Trump, as compared to voters who say they are voting for Joe Biden because of Joe Biden.
The only Presidential candidate this century to have an enthusiasm edge and still lose was Mitt Romney in 2012.  President George W. Bush and Senator John Kerry produced similar enthusiasm amongst their bases in 2004; whereas in 2000, 2008, and 2016 the eventual winners had decisive enthusiasm edges.
In conclusion, voters must want to vote and must want to support a specific candidate.  Today there can be no debate that President Trump has a decided advantage in base enthusiasm and can be most confident that his supporters will turn out.
II. Public Polling Methodology is Cheaper and Flawed
As was the case in 2016, the mainstream news media is relying on polling financed by their own operations and others, released publicly in order to set a narrative that conforms with their own worldviews.  The President’s campaign has repeatedly called into question the validity of such polling, based on methodology, party representation in the sample, wording of questions, and other factors.  These are legitimate criticisms, as there are real differences between public polling and proprietary internal polling such as the campaign conducts for itself.
There are a many key distinctions between public polling and proprietary internal polling.  These differences can play a major factor in the overall quality of polls and the accuracy of their findings. Generally speaking, public pollsters are extremely cost conscious, limited in scope in what they are able to do, and thus unable to match some of the more high-quality polling standards of private pollsters.
Below are the ways in which internal polling is conducted compared to the ways in which public polling is done, though it must be noted that public polling can vary wildly in quality. 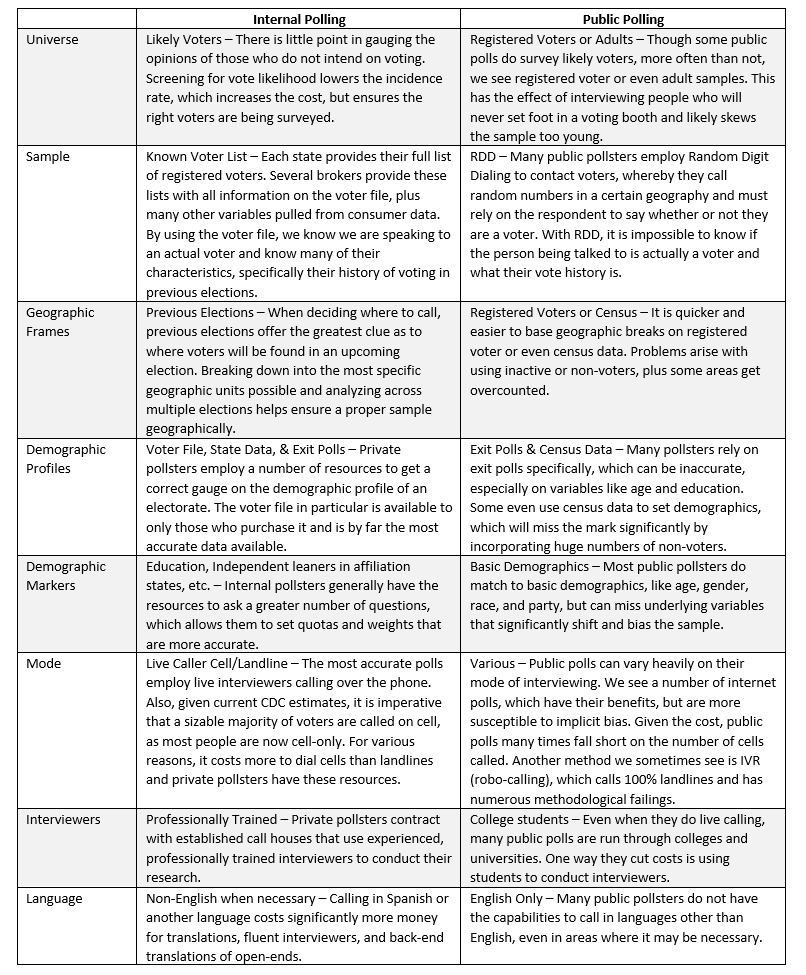 We know the media loves to play the game of using their public polling to create an unfavorable scenario and to attempt to discourage President Trump’s supporters.  As we can see from the obvious level of enthusiasm among Republicans, especially as compared to Joe Biden’s situation, it is not working. And as we have repeatedly stressed, our own data shows that the President remains strong in our key states against a defined Joe Biden.