Merry and bright: Get out and light up the nights leading up to Dec. 21

​ Join Alaskans across the state to light a candle for solstice, welcoming brighter times to come

​DECEMBER 7, 2020 — John Brueck in Cantwell has about 70 empty yogurt containers stored in a closet at work.
John Pearce in Anchorage has a kiddie pool, 5-gallon buckets and triangle frames he made out of plywood and two-by-fours in his garage.
None of these things come to mind when we say “get out and play” during the winter — but they could.
When the days get shorter, darker and some might say drearier, we tend to gravitate to the couch and the carbs rather than bundling up and getting outside for a walk, a ski or playing around with the kids. Sometimes we’re just looking for a reminder that spending time outside can help clear up what we’re feeling on the inside, even if only for a short while. During the darkest days, taking your activity outdoors can make things a little brighter, which is where those containers and two-by-fours come in. 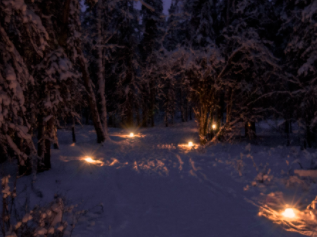 Our lives are feeling like the ‘90s movie “Groundhog Day” right now. Every day is reliving a slight variation of yesterday. Want to break the monotony? Try something new. Stick with this blog until the end and see how you can join Alaskans from Kaktovik to Ketchikan and light up the night together for winter solstice.
Between now and Dec. 21, there are a few ways to get your homemade lights ready. Use a quart-sized yogurt container like John Brueck does and make an easy and beautiful ice candle holder. If you’re a big yogurt eater (it’s a great source of protein, especially with no or low sugar, but we digress), you could make dozens of them that line pathways or driveways to brighten your outdoor activities. Or you could take your kiddie pool, buckets and wood frames like John Pearce and turn your downtown backyard into a candle-lit winter wonderland to delight your children and make playing outdoors even more fun.
Light your pathways with ice luminariesJohn Brueck has been a park ranger at Denali National Park for the past 10 years. He’s also a cross country skier who’s helped organize and decorate for a popular annual event called the Winter Solstice Ski and Stroll. That’s when the community comes together and creates about 400 ice candle holders to light up a one-mile ski trail through the national park.
“It’s a fun thing to do on the darkest day of the year,” Brueck said.
People call these ice candle holders by different names. Some call them luminaries. Brueck calls them a slight variation of that — luminarias — in honor of the tradition behind them. Brueck said the idea for the ice candle holders comes from the New Mexico tradition of filling brown paper bags with sand, and then placing a small lit candle inside. These paper lanterns line walkways during the holiday season.
“We adopted that idea up here,” Brueck said.
The Denali National Park Ski and Stroll will not be happening this year due to the pandemic, but Alaskans can still borrow the event’s idea and brighten up their yards and even driveways with ice candle holders.
Making your own ice luminary is a simple, fun process that can involve the whole family: 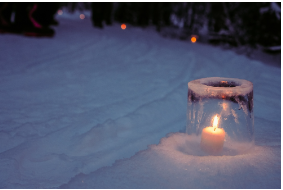 Step 1: Fill an empty yogurt container or bucket with water, almost to the top. Add food coloring if you want a colorful luminary. Set it outside to freeze. Freezing time varies with the temperature. At 15 degrees Fahrenheit, it could take 15 hours for the luminary to freeze. At minus 20 degrees, it could take only 5 hours, according to Brueck’s instructions.
Step 2: Check your container. Brueck said the trick is to catch the luminary before it becomes too frozen. When the top is frozen to about 1-inch thick, the luminary is ready to remove. Hold the container over the sink and turn it upside down, with your hand at the bottom over the opening to catch the ice when it slides out. Pour warm water on the bottom of the container to release the ice.
Step 3: If ice formed at the bottom of the container (which is the top of the luminary), use a chisel or warm water to remove the ice and pour the water out. Use the chisel or warm water to form the opening of the luminary to make sure it can fit a small votive candle that’s about 2 inches tall and 1 ½ inches wide. Place a candle inside, light it and enjoy.
Make landscaping a winter activityJust before Thanksgiving, John Pearce in Anchorage welcomed home his 18-year-old son from his freshman year at college. Pearce also has a junior in high school. Years ago, when his boys were both little, Pearce decided to give them a beautiful surprise in their own backyard. That winter playground became a family tradition. 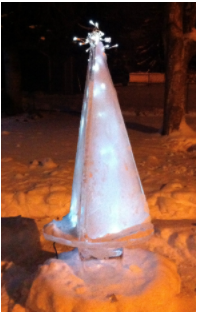 The idea came after seeing some friends line their driveway with ice candle holders made from 5-gallon buckets. Think about what Brueck made, but with much larger containers. Pearce was intrigued and started asking questions about how to make them. Then this scientist got to work expanding on the idea.
“The next winter, we made an ice playground in the backyard for the boys because they were young,” he said. “I basically filled any container I could find and let it freeze.”
Pearce dug a snow maze in the backyard and assembled an outdoor obstacle course that he decorated with frozen creations. Picture this: First, he froze a 5-gallon bucket of water, and the resulting ice block became a tree stump. Next, he lined a kiddie pool with a plastic sheet, filled it with water and froze it outside. The ice disk became the base for the tree, resting on top of the ice stump. For the final step, he took the wooden triangle frames he built with 4-feet sides, lined the frames with plastic, filled them with water and froze them. When he leaned the three large frozen triangles against each other on top of the disk, the result was a frozen Christmas tree that he could brighten with candles or lights made especially for outdoor use.
Pearce said the fun is in the creativity. Play around with what you have. PVC pipe, for example, can turn water into frozen rods. Fill empty cardboard milk cartons with water that’s dyed with food coloring, freeze them and then rip off the cardboard sides. You’re left with ice blocks that your family can turn into sculptures. Kids can be great helpers, Pearce said.
“They love the activity of pouring water into the forms and helping put them together,” he said.
Light your candles across Alaska on Dec. 20Starting now to create your own ice luminary will get your family ready for a first-time statewide event the day before winter solstice. The Alaska Department of Health and Social Services is inviting communities across Alaska to partner in this event and make it their own. Together, we will join “Bring Back the Light.” It’s simple to participate and won’t take much time, but it will celebrate our resiliency, support for one another, and hope for better times to come. New vaccines shown to be highly effective and treatments are on their way. We can shine our lights to honor the health care workers, teachers and others who’ve cared for us, taught our children in whatever ways possible, and kept critical businesses going during this difficult year.
At 5 p.m., Sunday, Dec. 20, stand outside on your porch or in your front yard. Then light a candle or your luminaries, and turn on your flashlights, headlamps or lanterns. If you’d like, sing your favorite holiday song. Take a walk around your neighborhood and enjoy the lights around you. We hope you’ll see your neighbors shining their lights and welcoming better and brighter things to come in 2021.
Learn more by checking out the Facebook event or on the DHSS winter resiliency website.
​ 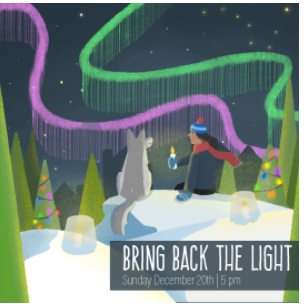 ​Photographs courtesy of John Pearce, John Brueck and the Denali National Park and Preserve
Read the entire Play Every Day blog online.
Sign up to receive announcements for updates to Play Every Day's blog and website.
Play Every Day is a campaign with the Alaska Department of Health and Social Services to help Alaska children grow up at a healthy weight and encourage families to be physically active and choose healthy drinks. For more information, visit www.playeveryday.alaska.gov.