​TODAY'S TAKEAWAYS |
15th straight day with COVID positivity rates below 10%
Numbers continue moving in the right direction
Schools are open
Unemployment claims drop sharply
​DeSantis: Don't always trust COVID headlines on kids going back to school
Palm Beach Post
With hundreds of students testing positive for the coronavirus as they return to Florida universities, Gov. Ron DeSantis on Thursday lashed out at the suggestion that sending young people back to school is unsafe.

Not only is it likely that the students contracted the virus before they went back to college or elementary and high schools that have reopened across the state, but the number of kids testing positive is remarkably low, he said.
“You see the headlines that say, oh, 2,000 students at the University of Alabama … have tested positive and they test like 60,000 people. Actually I think it was less than 2,000,” he said.

So the rate is actually lower than it is in the United States, but it is being portrayed as if there was a massive outbreak at the University of Alabama,” he said during a press conference in Tampa.
Continuing his rant against the media, he said there is also no mention of the severity of the symptoms.

“Particularly for that age group, the vast majority of folks who are testing positive on these university campuses don’t have symptoms and don’t end up becoming ill,” he said. “I think that’s significant. I think that people would want to know that.”

TAMPA, Fla. - The state of Florida's COVID-19 numbers are trending downward, from new cases to hospitalizations. Florida's percent positivity, the rate of new positive tests, is half of what it was just six weeks ago.

It's encouraging news when just weeks ago, Florida was breaking national records and not for good reasons. But health experts urge everyone to not let their guard down.

"I think it is something that will give people a little bit of hope," DeSantis said.

That hope, of course, is driven by the numbers. He said that COVID-positive hospitalizations are down 50% in Florida. Sunday's number of 128 COVID-19 admissions was the lowest since late June.

First-time unemployment claims in Florida took a steep drop to 45,723, a level not seen since the COVID-19 pandemic first stunned the state and national economies in March.

Claims for the week ended Aug. 22 were off by 27,051, the U.S. Department of Labor reported Thursday. But nationally, the figure for seasonally adjusted initial claims remained over 1 million, ending the week at 1,006,000, a decrease of 98,000 from the previous week’s revised level.
“There’s been no substantial easing of historically high demand for unemployment assistance, something we’ve seen for five months now,” said Mark Hamrick, senior economic analyst for Bankrate.

“New jobless claims dropped slightly by 98,000 to just over 1 million in the latest week,” he added. “Continuing claims are still shockingly high. In total, more than 27 million claims were made across all programs as of the end of the first week of the month.”

William Luther, an economist at Florida Atlantic University, surmised the flow of Floridians joining the ranks of the unemployed is on the decline. And despite the rash of job cuts at hotels and other tourism-related businesses, employees whose services are not required are being furloughed, not laid off.

Pot enthusiasts shouldn’t get their hopes up too high, though.

But Rep. Carlos Guillermo Smith and Sen. Jeff Brandes think it deserves consideration given that lawmakers need to plug a $5.4 billion budget deficit over the next two years.

And they say cold-hard budget realities could sway people to support their cause.

“We can cut funding for health care, public schools, transportation or housing, or we can find new revenue opportunities and put all sources on the table, including legalizing cannabis for adult use,” said Smith, an Orlando Democrat. “We all know it is going to happen eventually. Why not be proactive?”

A real understanding of Florida’s experience with the coronavirus may have to wait for the historians — news coverage is so politicized that it’s hard to get any sense of context from the reportage on what’s going on and why. Sifting and sorting through the data and the mess, I think, however, it’s possible to say a few things that will hold up as we move forward.

Florida will almost certainly pass through the corona-crisis without the hospital system meltdown that occurred in the northeastern states. And even after the “surge” in cases in July, Florida’s death rate will remain relatively low. As of late July, Florida was experiencing around 28 deaths per 100,000 compared to 177 in New Jersey, 168 in New York and 124 in Massachusetts. That’s the lowest death rate per 100,000 among the 10 most densely populated states, and the seventh-lowest rate among the 10 most populous states. Even if deaths continued at record levels in the state between the time I’m writing this and the time you’re reading it, Florida probably won’t even move into the top 20 states in terms of death rate.

» Florida’s relatively low population density may have helped. There is a stronger correlation between the density of a state’s population and a high death rate than the size of a state’s population and its death rate. Florida is the eighth most densely populated state, much less densely populated than most of the states ahead of it. And by my reckoning, as of the end of July, the 10 most densely populated states (which include low-population Rhode Island and Delaware and don’t include Texas, California, North Carolina, Georgia and Michigan) accounted for more COVID deaths than the 10 most populous states. That fact is largely a function of the massive number of deaths in densely populated New York City and New Jersey, but I think density helps explain both why the northeastern states had big death rates — and why their caseloads remained low after the initial, brutal spike. Disease spreads faster in densely inhabited areas, and, likewise, pockets of immunity emerge quicker, too.

DOJ To See If States Contributed to COVID-19 Nursing Home Disasters
The Federalist
The U.S. Department of Justice’s Civil Rights Division is requesting data from states like New York to determine if a civil rights investigation should be conducted into COVID-19 spread in nursing homes.

“Protecting the rights of some of society’s most vulnerable members, including elderly nursing home residents, is one of our country’s most important obligations,” said Assistant Attorney General for the Civil Rights Division Eric Dreiband. “We must ensure they are adequately cared for with dignity and respect and not unnecessarily put at risk.”

The DOJ examination will determine whether an official investigation will occur under the federal Civil Rights of Institutionalized Persons Act (CRIPA), “which protects the civil rights of persons in state-run nursing homes, among others.”

“The Civil Rights Division seeks to determine if the state orders requiring admission of COVID-19 patients to nursing homes is responsible for the deaths of nursing home residents,” the statement reads.
COVID-19 by the numbers | COVID -19 Fatalities 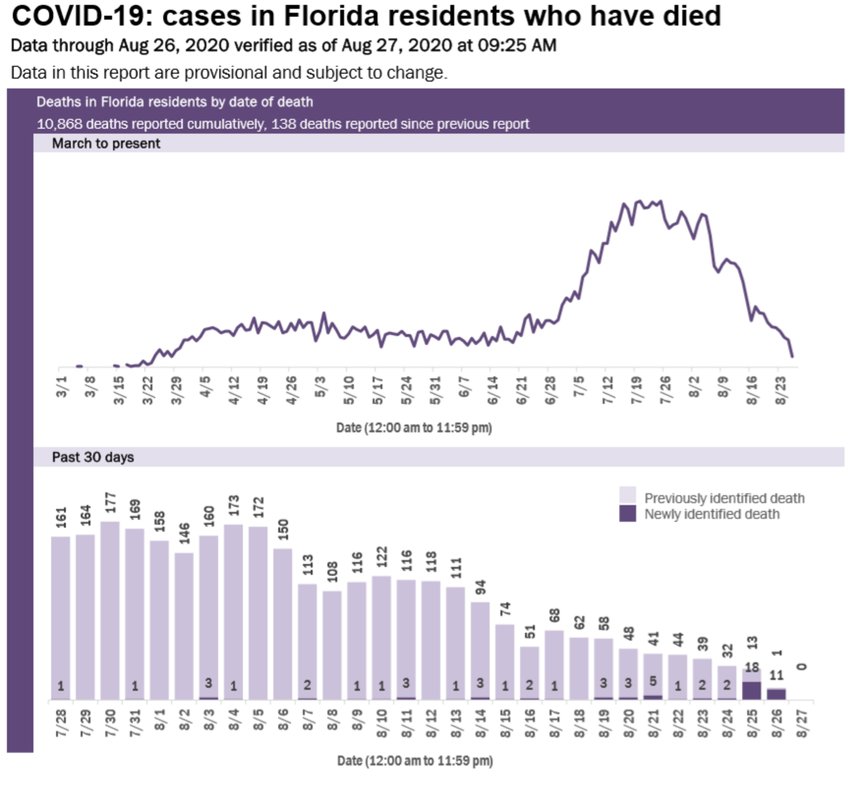