FACT CHECK: Yes, The Veterans of The Bay of Pigs Invasion Gave President Trump An Award 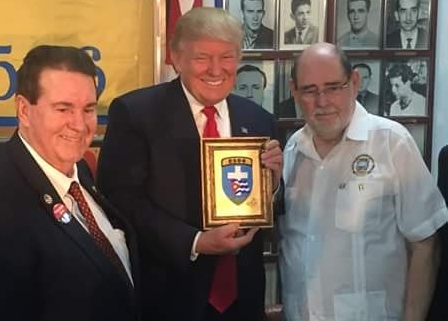 Democrats and their allies in the media never miss an opportunity to disparage President Trump's Hispanic supporters.

Case in point: With polls showing President Trump crushing Joe Biden among Cuban American voters, fake CNN "fact checker" Daniel Dale mocked the president for saying he was honored to have received an award from the veterans of the Bay of Pigs invasion. Dale claimed that no such award exists — except it does.

In October 2016, the Brigade 2506 Association awarded then-candidate Donald Trump with a hand-painted Brigade 2506 shield, an honor that the Brigade has rarely extended in its six-decade history. In response to the photo of the award being produced, CNN's Democrat operative Daniel Daniel laughed, insulting the members of the Brigade.

Given the left-wing media's lies, the Brigade 2506 Association issued a statement (full text below) confirming that they did issue an award to Donald Trump in 2016 in recognition of his commitment to "ending totalitarian regimes, drug and human trafficking and human rights abuses in our hemisphere and beyond."

The association’s statement continues: "We know what it is to live under socialism and we reject the efforts and the terrorist tactics that the extreme left is using to transform this country ... into a socialist state."

Once again, Fake News CNN and other left-wing media hacks could not control themselves and falsely attacked President Trump, making complete fools of themselves. ¡Qué papelazo!