Black Voters Are Raising Their Voices in Support of President Trump 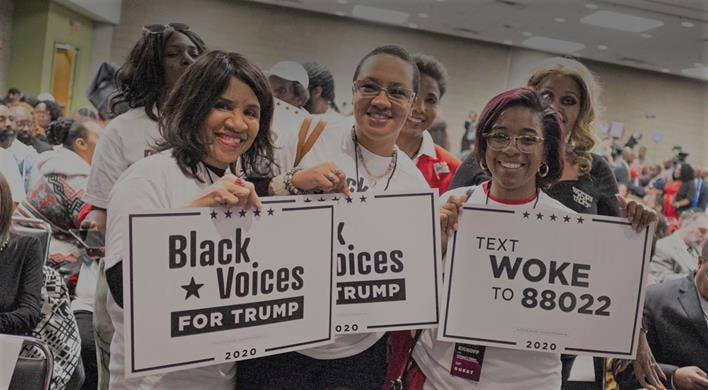 ​Since the launch of the 'Black Voices for Trump' coalition in Atlanta, African Americans are engaging more than ever with the Trump re-election campaign, and recently released independent polling shows support for the President is growing.
​
Both Emerson and Rasmussen, two well recognized polling firms, show black support for the President at 34.5% and 34%, respectively. This significant increase, within two weeks, directly correlates with the promises made and kept by the President to the black community. The President’s tangible results of low unemployment, historic justice reform, and increased educational opportunities are ringing loud and clear.

“You can’t dispute the fact that African Americans have been benefiting from President Trump’s policies,” said Katrina Pierson, Senior Advisor at the Donald J. Trump for President, Inc. “Four years ago, the President asked the black community, ‘What do you have to lose;’ now we are thinking, ‘Imagine what we stand to gain!’. African Americans are key beneficiaries of the America First agenda, and the Presidents growing support within the black community is a testament to the historic accomplishments made during this Administration.”

The ‘Black Voices for Trump’ coalition has continued to grow as other campaigns have seen major pushback from the community. We have worked hard to spread our message of promises made, promised kept with a full-page, full-color ad in 11 local black newspapers, radio spots on urban radio stations across the country, and nine published op-eds.

While President Trump’s policies have benefited African Americans by lowering the unemployment rate, lifting the community out of poverty, and increasing federal funding of HBCUs by 14%, the future for Black America will look even brighter with four more years of the Trump administration and school choice on the horizon.