Donald J. Trump for President, Inc. hosted 'War Room Weekly' featuring Trump 2020 Director of Communications Tim Murtaugh, Author, Contributing Editor of the American Spectator, and Former Reagan White House Official Jeffrey Lord, and Host of the Buck Sexton Show Buck Sexton.
The panel provided a detailed analysis on the deranged 'Biden-Bernie Unity Plan' Joe Biden is campaigning on to appease his socialist base. From defunding the police to opening the boarders to even the most dangerous criminal illegal aliens, and slashing educational opportunities like school choice, their plan is the most radical, leftist platform in the history of American politics. In addition, the panel noted these job-killing policies would ruin the historic economy President Trump built and strip all Americans of their opportunity for prosperity. President Trump is the only candidate that puts America first, and the fight for victory in November is about more than the next four years, it’s about the trajectory of our nation for generations to come. 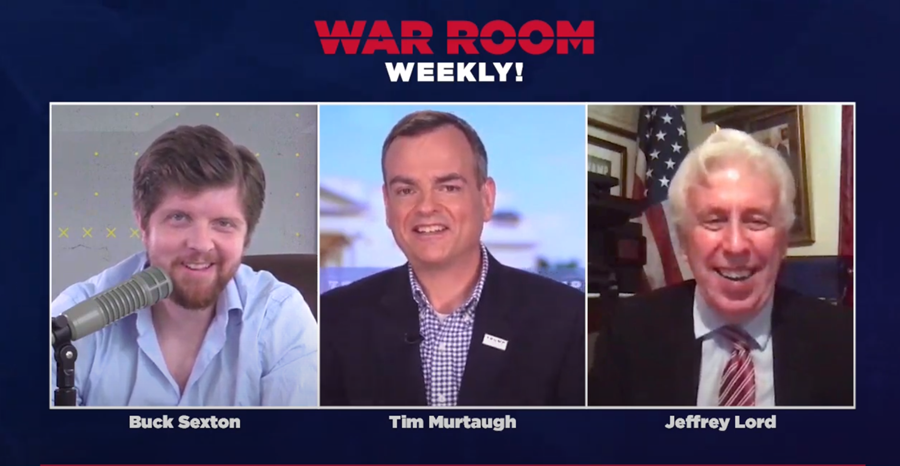 CLICK HERE TO WATCH
"Joe Biden has proven once and for all he is too weak to stand up to his radical party, and he would willingly aid in their attempt to destroy America as we know it," said Tim Murtaugh, Trump 2020 Director of Communications. "The 'Biden-Bernie Unity Plan' is a monstrous assault on America's national sovereignty and President Trump is the only leader capable of defeating their socialist mission to fundamentally damage this nation."
"It is clear now more than ever, Joe Biden and the left are all about power, it is non-stop and it is insatiable." said Jeffrey Lord, Author, Contributing Editor of the American Spectator, and Former Reagan White House Official. "President Trump has always and will always stand up to the Democrats’ insane, radical agenda. This President truly has America’s best interest at heart, and the patriots of this country must recognize this as they head to the polls in November."
"Not only would the 'Biden-Bernie Unity Plan' kill American jobs and industries, it would be ruinously expensive for middle-class families across the nation." said Buck Sexton, Host of the Buck Sexton Show. " The Democrat Party is trying to ensure the country is in its worst possible state to manipulate voters ahead of Election Day. It is critical to America's future that citizens of this great nation see past the charades of the radical left, and re-elect President Trump for four more years."