​Donald J. Trump for President, Inc. hosted 'Team Trump Online!' with Senior Advisor to the Trump Campaign Corey Lewandowski, Representative Elise Stefanik (NY-21), and Representative Matt Gaetz (FL-1).
The panel discussed President Trump's quick and decisive action to combat the coronavirus, in contrast with Joe Biden's lackluster leadership during the crisis. Specifically, the panel examined Joe Biden's coziness with the Chinese government, disastrous economic record, and failure to produce a concrete plan to defeat the coronavirus and safely reopen America. The participants detailed President Trump's efforts to ensure the health and safety of all Americans, while holding the Chinese government accountable for the damage it has caused. 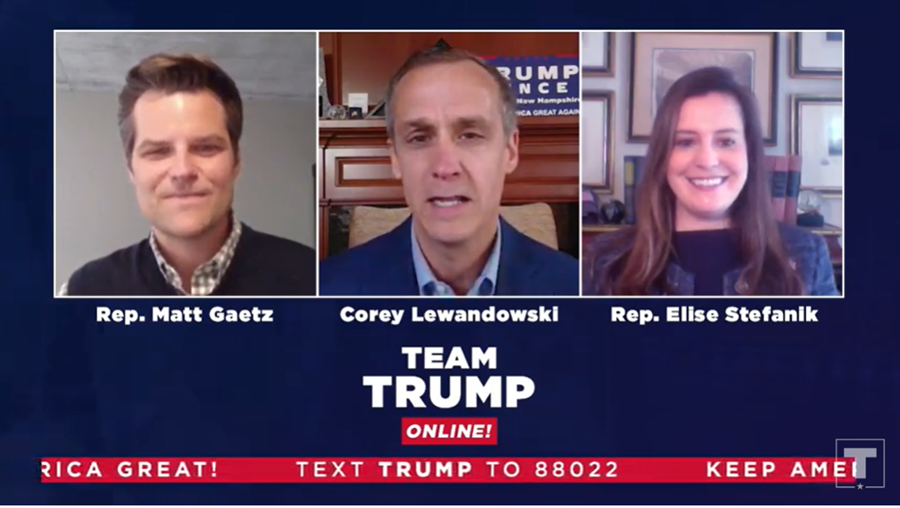 CLICK HERE TO WATCH
“President Trump has consistently placed America first in his administration’s coronavirus response, in contrast to the radical Democrats’ failed, globalist agenda,” said Corey Lewandowski, Senior Advisor to the Trump campaign. “To keep America the greatest country on earth, we must re-elect President Trump and defeat far-left socialist Joe Biden.”
“My home state of New York has been hit the hardest by the coronavirus, and President Trump has been with us every step of the way,” said Representative Elise Stefanik (NY-21). “President Trump’s bold, decisive leadership has provided the support we need to re-open the economy and get all Americans back to work.”
“The Obama-Biden administration was weak on China, and consistently placed the Chinese government’s interests above those of the American people,” said Representative Matt Gaetz (FL-1). “President Trump will defeat the coronavirus, and then hold the Chinese government accountable for all of the suffering they have caused.”
Are you looking for a shipping solution? Maybe you need to change freight carriers? Find out what the hard working and reliable people at Team Worldwide can do over land, sea and air​