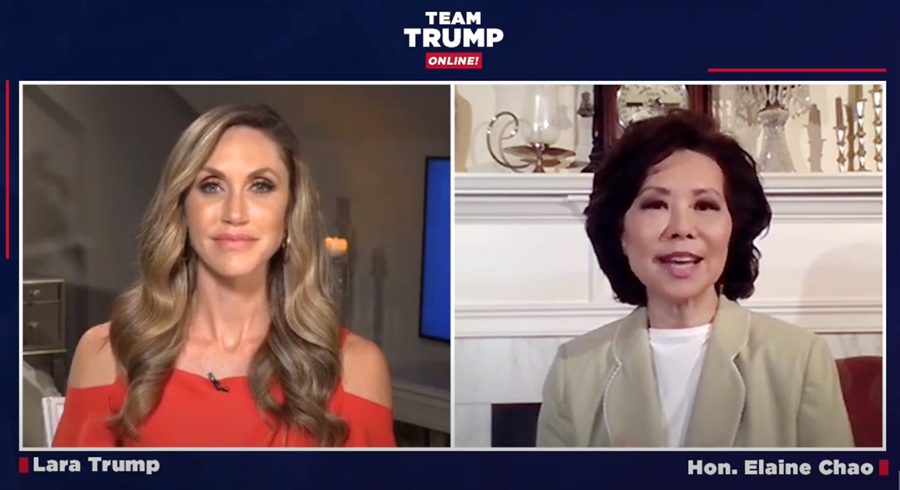 CLICK HERE TO WATCH
"With the launch of this new coalition, we are broadening the President's outreach to the Asian Pacific American community and are forming connections with new voters across the country," said Lara Trump, Senior Advisor to the Trump 2020 Campaign. "While President Trump works to unite all Americans to Keep America Great, Joe Biden seeks to divide our diverse communities and undermine the values that make the United States the greatest country on earth."
"Throughout his time in office, President Trump has promoted the success of the Asian Pacific American community through tax cuts, regulatory reform, and protection from the coronavirus outbreak," said the Honorable Elaine Chao. "President Trump has uplifted Americans of all backgrounds through his vision to rebuild our country, and I encourage every American to work to re-elect the President in November."
“Joe Biden spent decades in Washington as part of the status quo, ignoring the serious issues that need to be addressed with communist China, while President Trump quickly achieved tremendous success for the Asian Pacific American community with pro-family, pro-business policies," said the Honorable Kimberly Yee, Arizona State Treasurer.  "We need to re-elect President Trump to defend against the socialist policies that so many Asian Pacific Americans fled when coming to the United States and to protect the freedoms and values that make the United States the greatest country on earth."
"President Trump shares many of the values that Asian Pacific Americans hold most dear: hard work, family unity, and a belief in the American Dream," said the Honorable Sean Reyes, Utah Attorney General. "It is vital that we work to re-elect President Trump to defeat Joe Biden's socialist agenda and job-killing policies."
For more information, visit asians.donaldjtrump.com or text "ARISE" to 88022
Are you looking for a shipping solution? Maybe you need to change freight carriers? Find out what the hard working and reliable people at Team Worldwide can do over land, sea and air​