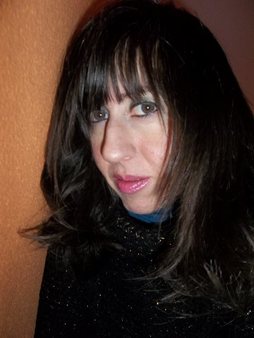 Check out everything she does
A very serious Thank You to Sadie for taking time out of her busy schedule for this interview!!!!
1) When did you first become interested in being behind the scenes in movie making?

I've been an author for many years and I also hold a diploma as a screenwriter, but it was right after I wrote my second novel Souls of Fire when I realized that writing could be more than just a hobby . The way I write is very visual, so I thought it would be great to see my works on the big screen. My first 45-minute film was the ambitious musical DMUS, which has recently finished the festival circuit. I had two teams working together, both in Spain and LA. Director Steve Royall arranged everything in Los Angeles. He shot his part of the film there and we shot the rest of the movie in Lugo (Spain). I also shot the music video So Far by Daniel Angelus, the short film Maybe Someday and I'll be filming a comedy film titled Blown Away at the end of May. With a bit of luck, I intend to shoot a full feature movie based on my third novel, Remembering Bethlehem in the near future.

Apart from holding a BA in English Literature and Linguistics and the above mentioned diploma in Screenwriting, I got an MA in British and Hollywood Cinema (University of Zaragoza) and an MA in Film Direction and Production of TV Shows (University San Jorge).

3) Is there any way to gauge how much life or non-school experience you have?

To be honest, I got my MA in Film Direction more than one year after I shot my film DMUS. This musical was an incredible challenge for me and it really helped me improve my skills. I learnt so much from it and the way things should be done in the film industry. At the same time, there were so many setbacks in the way, that every single day from pre-production from post-production was a lesson for me. I can say I learnt all the good and the bad things about making a movie in one go.

4) How much has the industry changed since you started? I realize the technology is constantly changing. I mean with actors / actresses, genres, the overall ways a film is produced.

I've been a film director for about three years, so I cannot see so many changes, except from the fact that we, women filmmakers seem to be more visible than before or at least, more ladies decide to direct movies now. The worst thing is that it's more difficult than before to get funds. For example, in Spain, crowdfunding campaigns don't usually work and unless you are very famous, you have to manage and raise your own money. That's not easy. From my own experience, actors are much easier to negociate with than production companies. These days, many production companies usually ask for lots of money. Even a 10-minute short film can cost you a fortune and we all know that, 99% of the times, short films never make a profit. So you invest and it's a huge risk because chances are, you'll never get anything in return. I feel that people who are part of the film industry were more generous and eager to help years ago. There were more philanthropists. Now, everything is about money. Sadly, very few mates support the arts unless you give them a cheque first.

5) Why did you decide to become an independent film maker? We are in the era of indies in all forms of art. With film, it appears to be a great challenge.

Because I love cinema. I don't care about money or awards. I want the public to watch my films and make them "feel". My movies always have a hidden message and I really hope people can read between the lines and unveil it.

6) What are the major differences in films / film making between the United States and Spain?

I believe indie cinema is more important in the USA than in Spain. You can at least have a better chance to see your films in festivals or if they're good enough, in movie theatres. Here, the market is very limited. Unless you are lucky enough to get many awards in festivals in Spain, nobody will give you a chance.

7) In your personal experience, do things like sexism, prejudice exist in the film industry?

Of course. As I said before, it's very difficult for a woman to be part of the film industry. We're not taken seriously. Now and then, I've been asked if I can really direct a film. In general, people get surprised when I tell them I'm a filmmaker.

8) Again, in your personal experience, is it harder for a woman to taken seriously as a writer, director, or any behind the camera role?

It happens all the time. I really hope things change in the near future because we deserve to have the same opportunities.

9) What were some of the major challenges you have faced? Any you still deal with?

Before shooting DMUS, some people told me I'd never make it. Firstly, because it was a musical and you cannot make a musical with such a low budget and secondly, because everybody thought I was just an "author". They were sure I didn't have any skills and took for granted I'd give up in a few months. My style is very different from the kind of indie films people are used to watch in Spain. I have an American style and some colleagues would prefer the usual Spanish "flavour" that is fine over here. Yet, it's a contradiction. Spanish movies are more difficult to sell abroad because, most of them, deal with stories that only appeal to the Spanish public. Directors like Bayona or Amenábar are among the few ones who really understand the concept of selling our films outside Spain. Their stories are international and appeal to all audiences. That's the difference.

10) In the United States, every year, there are several award shows. Do you feel there may be too much focus on them vs. making high quality films?

I wish we'd have award shows in Spain! Making high quality films is very expensive, much more than people think. Some shows related to the performing arts should be used as a tool to improve any skills and get some attention.Of course, I'd ask any big studios in the USA to make a blockbuster and hire indie artists to give them a chance.

11) Can you describe what you felt when your first film was seen on a big screen?

I was overjoyed. It's great to see how the characters you created are real. It's the kind of feeling that you'll never forget.

12) Do you feel films may be starting to rely too much on computers overall?

I recently did a course in editing and I believe computers are necessary, especially for visual effects. Imagine post-production of a sci-fi film without them! It really depends on the movie genre, but it's true that computers make things much easier.

13) Any advice for a person, especially female who wants to make a career behind the camera?

It's not an easy road. Yet, no matter what people say, they should never give up. If they work hard, they'll make their dreams come true.

into the myst metaphysical shoppe