Black Voices for Trump hosted 'Real Talk Online' with Senior Advisor to the Trump Campaign Katrina Pierson, Black Voices for Trump Advisory Board member, CEO of Chickasaw Community Bank, and former Speaker of the Oklahoma House of Representatives T.W. Shannon, and Black Voices for Trump Advisory Board member and RNC Senior Communications Advisor Paris Dennard.
The panel discussed President Trump's upcoming Make America Great Again rally in Tulsa, Oklahoma and touted the more than one million people who have signed up to attend. They contrasted the enthusiasm around President Trump's campaign with that of Joe Biden, who remains hidden in his basement, unwilling to answer questions from the American people. The participants highlighted President Trump's record for the Black community, including his recent Executive Order on police reform, as well as his actions on criminal justice reform, school choice, and funding for HBCUs. They encouraged Americans of all backgrounds to work to re-elect President Trump this November and detailed the series of ways that voters can get involved with the Trump 2020 Campaign. 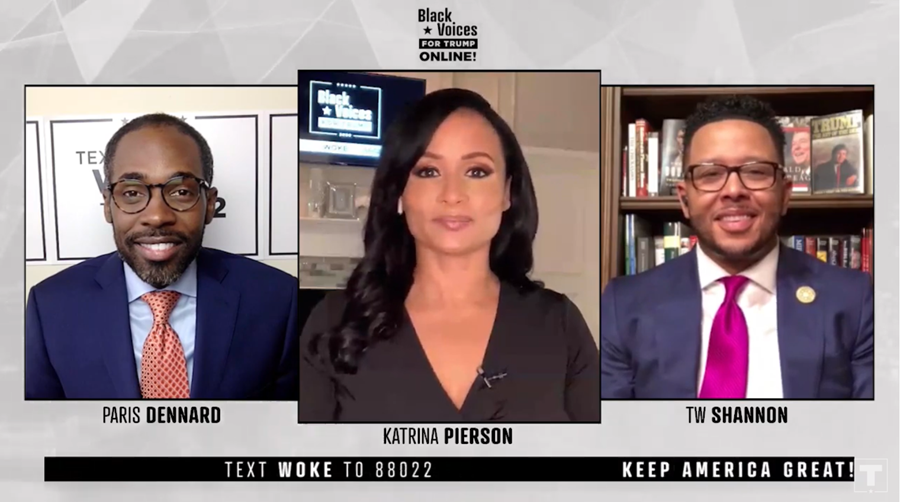 CLICK HERE TO WATCH
"President Trump is returning to the campaign trail with one of his signature Make America Great Again rallies in Tulsa, Oklahoma this weekend while Joe Biden remains hidden in his basement," said Katrina Pierson, Trump 2020 Senior Advisory. "As our country works through these challenging times, we need a leader like President Trump who has the stamina to speak directly to the American people - not one like Joe Biden who hides from public scrutiny."
"As President Trump returns to my home state of Oklahoma for a Make America Great Again rally, it is clear that his achievements for Black America are building generational wealth in both my community and nationwide," said T.W. Shannon, Black Voices for Trump Advisory Board member, CEO of Chickasaw Community Bank, and former Speaker of the Oklahoma House of Representatives. "Joe Biden has spent decades in Washington undermining the Black community, so I am proud to support President Trump and his record of Promises Made, Promises Kept."
“The incredible enthusiasm behind President Trump and his re-election campaign is something Joe Biden can only dream of,” said Paris Dennard, Black Voices for Trump Advisory Board member and RNC Senior Communications Advisor. “Biden’s 44-year record pales in comparison to President Trump’s, and the overwhelming interest in this weekend’s Tulsa rally only confirms how excited the American people are to have four more years of President Trump's America First agenda.”